A hooker in Zimbabwe made a miraculous resurrection after “dying” while conducting her business with a client.

Bulawayo reported that last Tuesday, March 19, around noon, a prostitute was found dead in a room in Manor Hotel in Bulawayo, Zimbabwe. She reportedly died after collapsing during sex with a customer. Police proceeded to put her presumably dead body in a coffin, but they got the surprise of their lives when the hooker came back to life.

The hooker, who has been identified as “MaNdlo,” reportedly freaked out the crowd that gathered around her body in the hotel. She began screaming the words, “You want to kill me,” since she reportedly felt that the police were trying to kill her. The hooker’s customer fled the scene as this madness occurred.

A source for Bulawayo described the crazy scene:

A number of people who had gathered to witness the woman’s “dead” body being removed from a room at the hotel reportedly fled from the scene. Some are said to have fallen while others tripped over each other in fear of the “resurrected” woman. It was like a movie. People were running away in different directions. It was a scary incident because we were all convinced that she had died because she was just cold. Miracles surely do happen.

Share this with someone who believes in the afterlife.

The police who had the task of carrying out the dead (but now alive) prostitute tried to calm her down while she continued to accuse them of trying to kill her. Raymond Nariti, the hotel’s manager, stated that he had no clue about what really went down at his establishment:

The police officers came with a steel coffin but they left without carrying a body. So I do not know what happened. 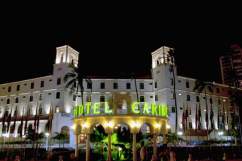