National media outlets are alive with the story the former murder suspect Casey Anthony is pregnant. The story was broken by The National Enquirer in their print edition. Quoting from the Enquirer, The Daily Mail references an unnamed source who said:

She just said that she fell in love with a very wealthy man while she’s been in hiding. Casey said he’s taking care of her financially and he’s so obsessed with her that he’ll do anything for her. Her eyes lit up when she told me that she was expecting, but she wouldn’t tell me who the baby’s father is.

Anthony was acquitted of killing her daughter, Caylee, in July 2011. Last week Anthony was back in the news when she emerged to declare bankruptcy. 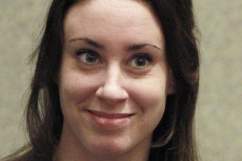 The Infamous Casey Anthony is Back in Court

Back in July 2011, the Enquirer carried another story stating that Anthony was pregnant. While that appears to have been incorrect, the speculation had been that Anthony had gotten herself knocked up as a means of avoiding the death penalty. An insider told the Enquirer then:

Casey could be lying about being pregnant just to get atten­tion, it is her nature, and her motive would be to play an emotional card with the jury, which might feel sorry enough not to. Her few confidants inside the prison don’t know what to make of her incred­ible claim. Is it another Casey fantasy or is it true? Only time will tell.