Italian Cardinal of the Catholic Church Angelo Scola has emerged as the front-runner for the 266th pope as the Church’s cardinal electors prepare to elect a successor to Pope Benedict XVI. A safe pick for his similar beliefs to the former pope’s and his conservative views, the candidate would resume a long lineage of Italian popes. Here’s what you need to know about Italian pope hopeful Angelo Scola. 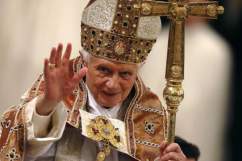 The Next Pope of the Catholic Church: Top 10 Candidates

1. Angelo Scola is the Leading Italian Candidate to Become Pope


Angelo Scola is the leading Italian candidate to become the next pope. Scola is from Milan and is the son of a socialist Milan truck driver and a practicing Catholic housewife. His strong pastoral experience gives him an edge over other candidates and and he offers a continuity to the Catholic Church that aligns with the views Pope Benedict XVI.

2. Scola Was a Favorite in 2005
Scola was a favorite in 2005 when Pope Benedict XVI was selected, but he was not chosen because he was seen as too young. He is now 71 years old and has a much better chance.


The pope hopeful was ordained a priest in 1970 at the age of 29. It was during his early years in the Cathloic Church that Scola met three other prelates that are currently possible successors to Benedict as well: Christoph Schoenborn from Austria, Marc Ouellet from Canada and Peter Erdo from Hungary.

5. Scola Was Appointed Archbishop of Milan in 2011


Scola condemns Islamophobia in the Catholic Church and is an advocate of Catholics and Muslims building stronger ties. He is the founder of the multi-lingual magazine called Oasis aimed at Christians living in Muslim cities.

8. He is Conservative on Social Issues
Scola has no intentions of easing the Catholic Church’s stance against artificial contraception or gay marriage as he is very traditional in his views. In 1997, when asked about women and priesthood, he told reporters that “the church does not have the power to modify the practice, uninterrupted for 2,000 years, of calling only men.”

9. If Elected, Scola Will Resume a Lineage of Italian Popes


If elected as the new pope, Scola will resume a linage of Italian popes, who ruled for more than 450 uninterrupted years before John Paul II and Benedict XVI. However, Scola said the nationality of the pope does not matter to him.

“Moreover, as the election of the last two popes clearly showed, there no longer exists the problem of the automatic choice of an Italian pope,” he told the magazine, Inside the Vatican, in 2011.

“Since Scola is a dedicated Ratzingerian in terms of intellectual outlook, those who believe the next pope ought to take a somewhat different approach, or at least have a somewhat different sense of priorities, might see him as a bit too much continuity,” The National Cathedral Reporter’s John Allen said. 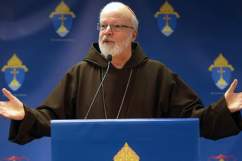 Loading more stories
wpDiscuz
0
0
Would love your thoughts, please comment.x
()
x
| Reply
Angelo Scola has emerged as the front-runner for the 266th pope as the Church’s electors prepare to elect a successor to Pope Benedict XVI.