NBC is preparing to air excerpts of a Jerry Sandusky jailhouse interview on next Monday’s edition of The Today Show. The lawyer for the former assistant coach of Penn State stated that these excerpts were also given to a documentary filmmaker. The filmmaker is prepping a defensive documentary for Joe Paterno as well.

American journalist Matt Lauer gave some details to The Washington Post about the interview:

He’ll describe in his own words what he says happened on the Penn State campus.

The convicted sex offender gave his account of all the sexual encounters that ended up landing him in prison. Sandusky, 69, also spoke about Joe Paterno (his former boss), who was also accused of covering up the allegations brought up against Sandusky. Sandusky makes sure to speak about Mike McQueary, a then assistant who told Paterno in 2001 that he saw Sandusky showering with a young boy in a football locker room.

Sandusky is currently serving a 30-to-60-year prison term for 45 counts for the child sexual abuse of 10 boys. Even though he’s been found guilty of these crimes, Sandusky still maintains his innocence.

Pennsylvania prison system spokeswoman Sue McNaughton spoke to USA Today about her feelings towards Sandusky and his heinous acts:

Mr. Sandusky is where he needs to be. Rather than focusing on him, we wish the media would focus more on the victims and their recovery from the deeds of this individual.

A video interview Jerry Sandusky conducted with Bob Costas in 2011 can be seen above. Sandusky goes into detail about his showers with young boys. 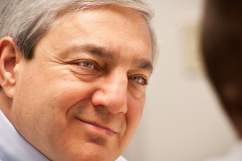