60-year-old Joe Rickey Hundley, the man who slapped a baby and used a racial slur on a Delta flight to Atlanta.

A 60-year-old man who slapped a crying baby and called the child the N-word on a flight from Indiana Atlanta now has his own sob story.

Joe Rickey Hundley says that when he committed the shocking acts he was on his way to decide the fate of his dying son.

Hundley’s lawyer, Marcia Shein, noted that Hundley was traveling to Atlanta to decide whether to remove his son from life support after finding out that he had overdosed on insulin.

Shein gave a statement on Joe’s emotional distress at the time to Daily Mail, reiterating that Joe’s son was “in a coma for life”:

On the flight, he was in distress, upset and grieving.

19-month-old Jonah Bennet, the baby that was slapped by Joe after he started crying on the flight.

A day after the flight, Joe’s son tragically passed away. Hundley previously stated that he was visiting Atlanta to visit a hospitalized relative, but he didn’t offer any more info on the actual situation. 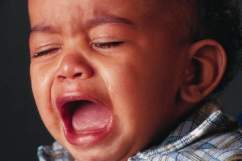 Due to this incident, Joe is facing an assault charge that carries a $100,000 fine and up to a year in prison. Joe was also released from his executive position with AGC Aerospace and Defense after the incident. The company gave a statement on Joe’s actions last month:

Reports of the recent behavior of one of our business unit executives while on personal travel are offensive and disturbing. We have taken this matter very seriously and worked diligently to examine it since learning of the matter on Friday afternoon. As of Sunday, the executive is no longer employed with the company.

Read More
Airplanes, Crime, Delta Airlines, Racism
That old dude who slapped the baby was flying out to take his son off life support.