The American Geophysical Union issued a press release on Wednesday morning announcing that NASA’s Voyager 1 spacecraft, which embarked on a journey to the outermost planets in 1977, finally left the solar system, making it the first man-made object to travel beyond it. However, about three hours later NASA issued another press release countering the AGU, saying that the Voyager team did not believe it left the solar system, reports The New York Times.

“It is the consensus of the Voyager science team that Voyager 1 has not yet left the solar system or reached interstellar space,” Voyager project scientist Edward C. Stone said.

“Within just a few days, the heliospheric intensity of trapped radiation decreased, and the cosmic ray intensity went up as you would expect if it exited the heliosphere,” Professor Webber said.

According to Dr. Stone, cosmic rays would not be the indicator of the spacecraft reaching interstellar space, but rather a change in in the direction of the magnetic field. He claimed that Voyager 1 is just in a different part of the solar system called the helioclff.

There’s no doubt that Voyager 1 will one day leave the influence of the sun, it’s just not there yet.

The AGU subsequently released yet another statement with the headline: Voyager 1 has entered a new region of space.

Check out some of these awesome pictures of some of the outer planets, as seen from the Voyager 1 spacecraft:

Saturn and three moons, Tethys, Dione and Rhea, seen by a Voyager spacecraft on August 4, 1982, from a distance of 13 million miles. 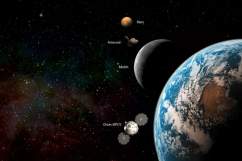 Read More
NASA, Science, Space
When the spacecraft does leave the influence of the sun, it will be the first man-made object to ever leave the solar system.