For being born without a penis, Andrew Wardle of Britain has certainly made the best of his days. He’s managed to get over 100 women into bed — he’s apparently a pretty charming fellow — and yet he’s struggled with his condition for all of his 39 years. Now, though, medical advances have made it possible for him to experience a normal sex life by surgically creating a penis fabricated from his arm, and he’s going to take the chance.

“I’ve been told that after a year, and three operations, they will be able to build one that will work in the same way as any other man’s. If it’s a success, I can finally start living like a normal man,” he told The Sun. Wardle has had countless operations throughout his life, some of which to fix his ectopic bladder, so he’s no stranger to surgery down there. The next surgery, though, will be a bit different.

This time, doctors will take a large skin graft from his arm, roll it up “like a Swiss roll” (kind of gross analogy but we’ll go with it), and attach it to his pubic bone. A pump-powered implant will be necessary to fully complete the process. This will give him all of the functionality of a normal penis, including the ability to ejaculate. There are several risks inherent with the operation — complications with his already-existent kidney and urinary issues, or infection, to name a few — but the risks are well outweighed by the rewards.

Even though Wardle have the ability to become a father after the operation, he’s not sure he wants to. “I’ve spent my entire life thinking I would never be able to be a dad — and now with the possibility finally there for me, I don’t know if it’s something I could come to terms with,” he told the Huffington Post.

This disability only affects about one in 20 million men, and Wardle’s isolation due to the issue caused him to experiment with ecstasy and LSD. Ironically, this provided a loophole for his sexual encounters — he could take a girl home with him and blame his inability to perform on the drugs. His condition eventually led to a suicide attempt, after which his adoptive sister encouraged him to get help. He read an article from the Sun on a man who’d had a similar operation, and he became convinced that it was the path for him. Now he’s glad he did, because in a year’s time he could be a new man… literally. 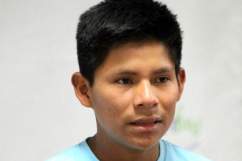