Cardinal Jorge Mario Bergoglio of Argentina has been elected as the new Pope, and henceforth the 76-year-old will be known as Pope Francis.

Here’s what you should know about the 266th pontiff of the Catholic Church.

1. He Was the Bishop of Buenos Aires


Bergoglio served as Archbishop of Buenos Aires since 1998. In 2001 he was elevated to Cardinal by Pope John Paul II.

2. He’s the First Non-European Pope in the Modern Era


Some 300 million of the world’s 1.2 billion Catholics live in South America.


His other lung was removed when he suffered an infection as a teenager.


The Jesuits, or Society of Jesus, are an order of priests known for intellectualism, discipline and missionary work. Jesuits take a vow of poverty. The group was founded by Ignatius Loyola in the 16th century to help protect the Catholic Church from the reformation. Pope Francis I is the first Jesuit pontiff.

5. He’s the Son of an Italian Immigrant


While those pulling for an Italian Pope had high hopes for the election of front-runner Angelo Scola, they can rejoice in the selection of a man of Italian heritage. Bergoglio is one five children of an immigrant rail worker. 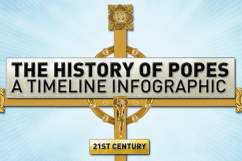 The History of Popes [TIMELINE INFOGRAPHIC]

6. He Fought Against Gay Marriage


Bergoglio battled unsuccessfully to defeat gay-marriage legislation in Argentina, which passed in 2010. He also condemns the adoption of children by gay couples, calling it discrimination against children; Argentine President Cristina Kirchner butted heads with him over this and said his tone invokes the times of the Inquisition.


Bergoglio was not at the top of anyone’s leaderboard for the top pope candidates. His odds were 33-1 on the betting website Paddy Power.

8. He Was the Runner-Up Last Time


When Pope Benedict XVI was elected in 2005, Bergoglio received the second-most votes. In the fourth round of voting, Bergoglio withdrew his name from consideration, allowing the uncontested election of Germany’s Cardinal Joseph Ratzinger, who took the name Benedict XVI.


Bergoglio is known for living humbly, having chosen to reside in a simple apartment rather than the Bishop’s palace in Argentina. He also rode the bus rather than using a chauffer and cooked his own meals.

10. He Has Been Openly Critical of Argentina’s Politicians

In 2002, during Argentina’s economic crisis, Bergoglio openly criticized the nation’s politicians for their decisions and how they affect the poor. A National Catholic Register profile on Bergoglio says:

His leading role during the Argentine economic crisis burnished his reputation as a voice of conscience, and made him a potent symbol of the costs globalization can impose on the world’s poor.