Scott Prouty has stepped forward as the man who recorded 2012 presidential candidate Mitt Romney’s 47 percent speech at a private fundraiser that may have cost him the election. Ed Schultz welcomed Prouty to The Ed Show on Wednesday night and interviewed the man who remained anonymous until now. Here’s what you need to know about Scott Prouty.

Scott Prouty is the man that recorded the speech given by Mitt Romney at a private fundraiser that ultimately hurt his chances in the presidential race for saying that 47 percent of American’s are dependent on the government, believe they are victims and that they feel they are entitled. Here’s an excerpt of the speech:

2. He is a 38-Year-Old Bartender in Florida
Prouty is a 38-year-old bartender that works for the catering company that served Romney’s fundraiser in Boca Raton, Florida. He felt that the people that couldn’t afford to attend the pricey fundraiser deserved “to find out what the candidate actually thinks.”

3. The Videographer Was Leaning Towards Not Releasing the Video


Prouty told Ed Schultz that he was initially leaning towards not releasing the video that would doom Romney’s campaign. Finally, after not being able to sleep one night, the videographer looked at himself in the mirror and called himself a “coward.”

“I said, I’m going to do it,” Prouty said. “I don’t think he has any clue what a regular American goes through on a daily basis. That guy has no idea. I couldn’t sleep after I watched it. I felt like I had a duty to expose it.”

4. He Didn’t Want Publicity for the Recording
The bartender released the video anonymously to avoid his own publicity. He wanted the focus to be on Romney only. Prouty also worried about what releasing the video would mean for his employment at the catering company. On some nights, he would bring in over $1,000 and didn’t want to risk the gig.

“I decided I was going to make a 24-hour a day push to make sure it went as far and wide as it possibly, possibly could go,” Prouty said. “It’s been a long journey for sure. A lot of people think I just sent it to the news media on a disc or something and then forgot about it. I had been pounding it.” 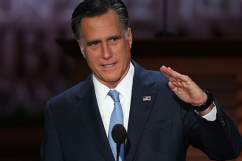 Mitt Romney: 47 Percent of Americans Aren’t Worth My Concern