The childish scribbles and flowery stationary make it seem innocent, but this note calls attention to our dangerous appearance and weight-loss obsessed culture. The note was found by Amy Cheney, among the “Polly Pockets, friendship bracelets” in her daughter’s room, as though a diet plan fits in perfectly with a 7-year-old’s life. Cheney expressed her outrage in a blog upon finding her girl’s, referred to as Miss Seven, “diyet” plan.

We can consider the positives of Miss Seven’s diet plan. She’s trying to be healthy. She recognizes that regular exercise, foods like yogurt and apples, and proper hydration are healthy. That’s pretty good for a 7-year-old, and probably indicates a good up-bringing and well-rounded education. Still, there’s something unsettling about a girl learning what a diet is, and that she should be on one, before she has learned to spell the word.

A 7-year-old’s exercise should be a natural part of her everyday life. She should be bike-riding, running and playing as though it’s instinctual. She shouldn’t have to write it down and then check it off like it’s a chore. That’s one of the perks of being a kid — spontaneous playtime is not only allowed, but expected.

It’s the act of making a list and the use of the word “diet” that is so upsetting. Making the list is so extreme that you can only wonder what the next step will be. What happens when she’s in middle school or high school, when the awkwardness and peer-pressure are in full-swing? Taking weight-loss to extreme measures can become unhealthy, with eating disorders like anorexia and bulimia emerging as a possibility. The problem is this girl, and many others, believe there is a mold they must fit in order to be beautiful.

This moment from The Simpsons is unfortunately accurate. Lisa Simpson has the benefit of smart adults putting words in her mouth, so she is able to vocalize the struggle of being a kid in a world that seems to put adult expectations on her. Kids are highly effective sponges, and will pick up things that parents don’t even realize are being put out there. The little girl’s mother says that weight is not an issue in their household and that it hardly comes up. “Where did she learn the word diet? How does she even know what a freaking diet is?” wonders Cheney. It turns out, Miss Seven learned about diets from a fellow 7-year-old who is on one. This sort of peer communication is not uncommon among young women.

The appearance-obsessed culture is rooted so deep that it’s not even affected by media. A University of Central Florida study found that almost half of girls aged 3-6 worry about being fat. The same study, however, found that the media is not to blame. Girls exposed to thin, pretty princesses are not more or less likely to be concerned about looks than girls who are not. And a Texas A&M study concluded that competition among peers is what leads to poor body images and eating disorders, as opposed to the media. That’s because this society not only pushes one accepted form of beauty, but it also promotes competition among females as opposed to friendship.

On the bright side, since media isn’t proving to have a negative effect on girls, it can be used as a learning tool and a means to open discussion about beauty standards. Amy Cheney used her discovery of the diet plan to have a chat “about diets and beautiful healthy bodies and the gift that they are.” Maybe we can change things one girl at a time. 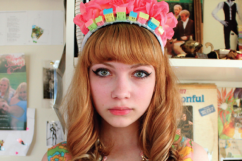