Masked gunmen burst into the Mermaid Bar near Cancun, Mexico, late on Thursday evening, killing six and wounding another five at a time when thousands of young tourists are in the area for spring break, reports the New York Post. (The Telegraph is reporting seven dead.)

The gunmen, reportedly armed with an automatic rifle and a handgun, opened fire on a group drinking in The Mermaid, a bar in the Cancun suburbs. At least six have been killed, with at least another five wounded. There is no motive known yet for the attack, but USA Today says that all of the victims were active members of a taxi drivers’ union in the area. Soldiers have been guarding the rooms of the victims who survived for fear of a follow-up attack.

2. The Incident Occurred Away From the Tourist Strip

Most tourists in the region stay in the Zona Hotelera area of the city, close to the beach. This attack happened in the northern end of town. Nonetheless, attacks like this are likely to harm the Mexican tourist industry.

…there is a misconception that cartels want to avoid interfering with the profitable tourism industry, or that they only target Mexican citizens. This simply is not true.

4. Cancun is One of the Few Cities in Mexico Without a US Travel Advisory Warning

A detailed US citizen’s advice report is available on Mexico. With reference to Cancun there is no specific warning:

With the new conflicts in Cancun, many of the acts typically associated with cartel violence have become more frequent. For example, in April 2012 authorities discovered two dismembered bodies along a street in Region 214 of Cancun. In another example of the ongoing turf war, authorities discovered a dead male accompanied by a narcomanta Jan. 12 in the Benito Juarez municipality (in which Cancun is located) of Quintana Roo state. The message said the victim was killed for belonging to Los Zetas.

5. This is the Second Major Incident in a Mexican Tourism Hotspot in the Past Month

Though the shooting in Cancun did not directly involve tourists, it’s likely to have an impact on Mexico’s already struggling tourism industry. In February, six Spanish women were raped by six masked men who raided their rented beach house in Acapulco. The women were tied up, held at gunpoint and attacked over the course of several hours.

The US Citizens Advice to tourists in Acapulco reads:

…you should exercise caution and stay within tourist areas. You should also exercise caution and travel only during daylight hours on highway 95D (cuota/toll road) between Mexico City and Acapulco and highway 200 between Acapulco and Zihuatanejo/Ixtapa. In Acapulco, defer non-essential travel to areas further than 2 blocks inland of the Costera Miguel Aleman Boulevard, which parallels the popular beach areas.

A report on Acapulco specifically reads:

Acapulco has become the most violent city in Mexico, with approximately 143 murders per 100,000 people during 2012. 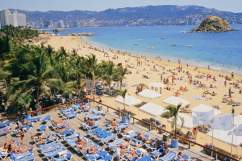 Loading more stories
wpDiscuz
1
0
Would love your thoughts, please comment.x
()
x
| Reply
Cancun is supposed to be one of Mexico's safe spots.