Authorities stand outside of the 79th street subway entrance where a teenager was hit and killed by a speeding train.

A teenager was hit and killed by a speeding train in Manhattan Tuesday when he tried crossing four sets of subway tracks, reports the New York Daily News.

The 18-year-old victim was trying to cross the tracks at the West 79th St. and Broadway Ave. station as a No. 2 train barreled through around 6:30 p.m. Two friends were with the victim, but it is not clear whether or not they also tried to cross the tracks. Horrified witnesses said they shouted at the teen, urging him to not cross before the train hit. The young man’s friends burst into tears as they watched the gruesome incident.

“He got smacked by a 2 express train,” said witness Anthony Escobar. “He got fried and mangled.”

The train came to a halt and passengers remained on board for more than an hour before they were allowed to exit from the rear car.

The 1, 2 and 3 subway lines were delayed because of the incident, but ABC Local reported that the trains were back up and running a few hours later.

The New York subway system has recently been plagued with both accidental and intentional deaths. Earlier this year, Manhattan Borough President Scott Stringer said that at the current rate, the city can expect 100 deaths in 2013, twice the amount as last year.

“These accidents have been happening too often and to too many New Yorkers,” Stringer said. “The time is now to search for answers.” 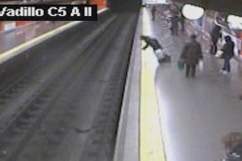