Telling someone to quit “Sagging” could be harmful to your health. This latest news story is evidence of that.

Eighteen-year-old Cody Burns of New Albany, Indiana reportedly got upset last week when his father told him to pull up his pants at their Mary Lee Drive residence.

The Daily Mail noted that after Cody heard this, he ignored the request. Then he walked into his kitchen, retrieved a knife, and stabbed his father in the left side of his chest.

When the authorities arrived at the scene, they found the victim sitting in a pool of blood on the living room floor. The map below displays shows the neighborhood on Mary Lee Drive.

According to a police affidavit, another person at the home witnessed the stabbing and backed up the testimony of the father.

Cody’s father was taken to a nearby hospital. His injuries were noted as being non-threatening and he is currently recovering. Cody himself was apprehended and taken to Floyd County Jail. 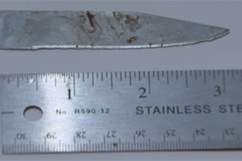 Three Years After Stabbing, Man Has Blade Removed From Back

Loading more stories
wpDiscuz
0
0
Would love your thoughts, please comment.x
()
x
| Reply
When told to stop sagging, this teenager responded in a most violent way.