Savannah Morning News reported that on Wednesday afternoon, a girl not yet 2-years-old was mauled to death by seven pit bulls and pit bull mixes in her own backyard.

According to reports from Bryan County Sheriff’s Office, 21-month-old Monica Renee Laminack crawled out the doggie door of her house. The girl’s grandmother woke up and looked out the window to see the dogs attack, but by the time she and others rushed out to pull the dogs off, it was too late. 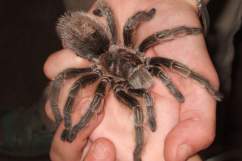 Police were called, and the coroner was immediately summoned because the girl was already dead. An autopsy is scheduled for Thursday, and Sheriff Clyde Smith said he would be shocked if no charged were filed. All the dogs were euthanized at the scene.