Look out, Williams sisters, there could be a new rising tennis star in the making who’s after your titles.

During the 2013 BNP Paribas Showdown in New York City, Rafael Nadal called out Ben Stiller to join him for a friendly volley on the court. What the tennis champ and Hollywood hotshot didn’t expect was to be humiliated by a 9-year-old after Juan Martin del Potro pulled her out of the stands for a doubles match.

The miniature tennis champ, Rebecca Suarez, not only held her own on the court with some nice shots against the net, but held a strong game face even when Ben Stiller tried to shake her confidence with some intimidation tactics. The little champ may be a good two feet shorter than her competition, but her game in on point.

Share this if you think Rebecca is a future tennis star to be reckoned with! 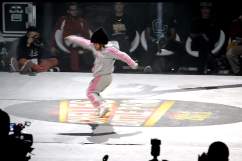 Read More
Ben Stiller, Inspirational, Kids, Tennis
She may be under 4-feet tall, but she isn't intimidated by a world champion on the court.