Your initial reaction to seeing a snake in your yard would be to run and grab gasoline to douse it and light it on fire, right? No? Well, you’re probably right. But don’t tell that to a woman in Liberty Eylau, Texas, who has just lost her home for doing just that. KSLA reports:

“While cleaning up, she saw snake, threw gasoline on the snake, lit the snake on fire,” said Deputy Randall Baggett with the Bowie County Sheriff’s Office. “The snake went into the brush pile and the brush pile caught the home on fire.”

Despite efforts by local firemen, her home was completely lost and the fire damaged her neighbor’s home, too.

Even though the woman is an obvious idiot who shouldn’t be allowed to play with matches in the future, officials have not stated if charges will be filed. While others have rallied to the snake’s defense and want her charged with animal cruelty:

Why isn’t this woman being arrested for cruelty to animals? Just because it wasn’t soft and cuddly doesn’t mean it doesn’t feel pain.

So next time you see a snake, better call animal control. Or just leave it alone. Because karma’s a bitch. 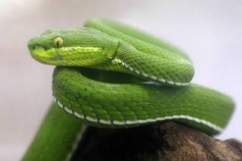 Man Dead After One of His 24 Venomous Snakes Bites Him

Loading more stories
wpDiscuz
0
0
Would love your thoughts, please comment.x
()
x
| Reply
Your initial reaction to seeing a snake in your yard would be to run and grab gasoline to douse it and light it on fire, right?