The Great White shark that was hooked off Port Everglades Inlet in Florida.

During a sportfishing trip in Florida during Spring Break, a group of four Atlanta, Georgia teenagers did something incredible – they hooked a 13-foot long Great White shark.

CBS News reported that on April 9, Harry Andros, Josh Shailer, and Logan Elliot, and Tanner Elliot (who play high school baseball in Dunwoody, Georgia), were traveling on the Hooked Up charter boat out of Fort Lauderdale. The Elliots’ father, Jared, was also along for the wild ride. Captain Taco Perez told CBS that the Great White shark they came across initially took a bonito off a kite line about 180-feet from the Port Everglades Inlet.

For the next two hours, everyone aboard the boat struggled with the shark before they were finally able to get the massive sea creature close to their vehicle. It was at that moment that they all realized they had hooked a Great White shark, which was estimated to weigh between 800 and 1,000-pounds.

During the hooking scuffle with the shark, the hook reportedly got free from the shark’s mouth. It then got lodged into the shark’s pectoral (side) fin. Once they got the shark close to the boat, the teenagers took a pic of it and proceeded to let it go free. 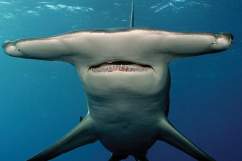 Shocking Infographic Shows How Many Sharks Humans Slaughter Every Hour

Captain Perez gave some comments on the shark to the Sun Sentinel:

No one knew what it was until we got it to the boat. I’ve been fishing here since 1969 and Greg and I saw one three years ago. It’s so darn uncommon. We’re pretty excited about it.

Great White sharks are kind of rare to spot along Florida’s waters. However, CBS Miami made note of the many shark species that have been spotted off Broward beaches:

Sharks off Broward beaches have made headlines over the last month or so. Thousands of black tip, lemon and hammerhead sharks have been spotted heading North on their annual migration.

Captain Perez also mentioned that this wasn’t the only recent case of a Great White getting hooked:

Capt. Taco Perez, who owns the Fort Lauderdale charter boat, told CBS4 he heard from a fellow charter boat captain in Miami-Dade that a Great White was hooked off Key Biscayne a few days ago and another one was spotted off Jacksonville five days ago. He believes more of this top predator of the seas will be spotted farther south as the fishing pattern continues to change. 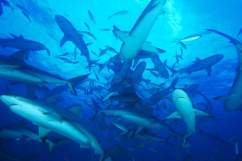 Loading more stories
wpDiscuz
0
0
Would love your thoughts, please comment.x
()
x
| Reply
A lucky pair of teenagers may have the best fishing story of 2013.