Employees investigate a train accident that killed two children when their mother drove around a lowered railroad crossing gate.

Two Iowa children are dead after their mother ignored lowered railroad crossing gates, resulting in their minivan getting struck by a freight train on Monday afternoon, reports the Des Monies Register.

Tara Lewman was stopped in her 2004 Dodge Caravan with her three children at a pair of lowered railroad crossing gates in Batavia, Iowa for an undetermined amount of time before she became impatient and decided to drive around them. One freight train pointing eastbound was parked near the intersection for a crew change and obstructed Lewman’s view around it. As she passed the train, a westbound train struck the van and threw it in a ditch next to the train tracks. Two of the children died in the collision, Kallie Clark, 5, and Erika Clark, 4, while the third child, Jordan Clark, 1, survived. Lewman also survived.

Verdae Blom, whose job is located along the tracks, witnessed the accident.

“It was a mess,” Blom said of the minivan. “It was a tangled-up mess. The whole back of it, on the passenger side from the front seat, the whole thing was wiped out. That’s the first time I’d seen anything like this and it was terrible.”

The 25-year-old driver and her surviving child were taken to the University of Iowa Hospitals and Clinics, however, a hospital spokesperson said on that she could not provide any information about their condition. 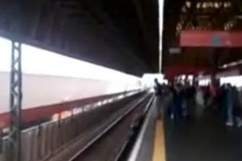