A trusted family pet killed a 2-year-old boy yesterday as a pit bull mauled a toddler when his mother left the room.

The horrific incident occurred in south Fulton County, Georgia, at about 1:30 p.m. Angela Rutledge, 32, was sitting at home with her son and the family’s pit bull, “who had never shown any aggression before”, 11Alive.com reports.

The mother left the baby alone with the dog for a moment and returned to discover the pet had attacked and killed her son. Police arrived and were able to confine the dog in a bathroom until animal control arrived on scene. The boy was pronounced dead at the scene.

When the boy’s father, Jeremiah, 35, returned home he became impossible for the police to handle and was “hysterical.” He was eventually contained after being tasered. The mother was brought to a local hospital for “suicidal thoughts.”

The dog has been taken to Fulton County Animal Shelter and is in isolation. It’s not known if the dog will be euthanized. 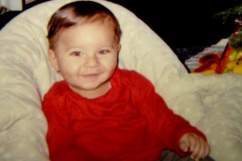