On Saturday afternoon (April 27, 2013), an 8-year-old girl named Leila Fowler was stabbed dead by a male intruder in her home in Northern California. Here’s what you need to know about this tragic stabbing, the intruder, and the manhunt that’s ongoing for the killer.

1. Her 12-Year-Old Brother Discovered Her Body


On Saturday afternoon, 8-year-old Leila Fowler was found stabbed to death. Her 12-year-old brother found her body after entering the room where she lay dead. The LA Times reported that the brother called for help and that he also spotted the male intruder inside their Valley Springs, Calaveras County, California home.

Fowler was previously reported to be 9 years old, but Coroner Kevin Raggio told CBS News that she would have turned 9 in June. Fowler was later pronounced dead at a local hospital.

KCRA reports that Fowler was one of seven children in her family. A news report by USA Today can be watched above.

2. She Was Targeted By The Killer


At a press conference yesterday, the Calaveras County police stated that Leila Fowler’s death wasn’t an accident. The Modesto Bee reported on the details given by the cops on this developing case:

Kuntz said it appears that the intruder intended to attack the girl, and that the incident was not a botched robbery or other crime gone wrong … Sheriff’s officials said they have checked on registered sex offenders and people on parole and probation for sex crimes as part of their investigation. But they stressed they were doing this as a matter of good investigative procedures and not because Leila’s slaying is a sex crime.

3. The Intruder’s Fingerprints and DNA May Been Found


The LA Times reported that investigators discovered and recovered fingerprints and DNA at the scene of Leila Fowler’s stabbing death. It is not known whether this evidence belongs to the male intruder. The LA Times provided some further details on the intruder:

The assailant was described as a white or Latino man, about 6 feet tall with a muscular build, last seen wearing a black long-sleeved shirt and blue pants.

4. A Massive Manhunt is Under Way


There are no suspects, but more than 100 police officers are searching for the male intruder. Fellow officers from several nearby sheriff’s departments, including those from Tuolumne and San Joaquin, as well as the California Highway Patrol and the Angels Camp Police Department, are aiding in the search. The Calaveras County Sheriff’s Department issued an update on Sunday about their findings thus far:

The search for a suspect in this case has continued overnight and through the day today. Overnight sheriff’s detectives and members of the California DOJ Bureau of Forensic Services executed a search warrant at the home where the homicide occurred. Evidence was collected at the scene including fingerprints and what investigators believe is DNA. At this same time, detectives were conducting follow-up interviews with witnesses and family members.

Police have searched nearby homes, storage sheds, horse stables, and attics in their pursuit of the killer. Officers told the community of Calaveras County to “shelter in place and lock your doors” as they continue their investigation. Helicopters have reportedly been flying overhead the neighborhood as this manhunt continues. According to KXTV:

Deputies have blocked off access point into the road near the home where Leila was killed. Only local residents have access to the street.

5. Extra Security Has Been Given to School Children


Nearby schools have reportedly enlisted the help of counselors who will be on hand to speak to students at Jenny Lind Elementary, Toyon Middle School, and Calaveras High School. Security has also been beefed up around the schools and bus stops. Mark Campbell, the Calaveras County school district’s superintendent, gave a statement to Fox News 40 on the matter:

As we all grapple with the tragic and senseless loss of one of our own, we do so knowing that we will be ready to do what is necessary to provide a safe environment for students and for staff, and to stand unified and strong as we provide whatever level of support and assistance that is necessary to help the family, our students, our parents and our staff process the unthinkable.

The residents of Valley Springs decided to honor the memory of Leila Fowler by tying pink and purple ribbons at a nearby elementary school on Sunday. A candle light vigil is being held tonight (April 30) at her elementary school. A tweet displaying the vigil details can be seen below:

Another Tweet pic shows the purple ribbons put up her around her school:

Parents on edge w/ Leila Fowler’s killer loose. Her school had 3 times as many absences yesterday-compared to normal twitter.com/AlexSavidge/st… 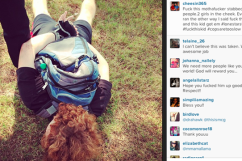 Loading more stories
wpDiscuz
1
0
Would love your thoughts, please comment.x
()
x
| Reply
Leila Fowler was found dead after being stabbed by a tall and muscular male home intruder. A manhunt is under way.