Researchers from the National Oceanic and Atmospheric Administration knew that Arctic ice was melting, but new studies report that it’s melting a lot faster than we thought, reports Nature World News.

In fact, Arctic ice is melting so fast that by the year 2050, it could be completely gone during the Northern Hemisphere’s warmest months. The news was reported in the journal Geophysical Research Letters and described that three methods were used to predict Arctic Ocean ice trends and that the melting is happening faster than previously thought.

The researchers note that “rapid Arctic sea ice loss is probably the most visible indicator of global climate change.” Earth’s temperatures are dramatically rising. According to a NOAA report in January, last year was one of Earth’s top 10 warmest since 1880 and the 36th consecutive year to exceed the 20th-century average of 57 degrees Fahrenheit. 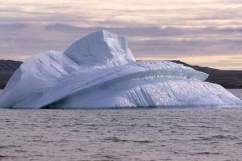 Read More
Arctic, Nature
Follow Heavy ↓
Arctic ice is melting so fast that by the year 2050, it could be completely gone during the Northern Hemisphere's warmest months.