Watch the horrifying video below: 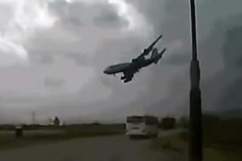 1. All Seven Were Americans

Five of those killed are known to be from Michigan, reports Daily News. There were no passengers on board, all killed part of a crew, including four pilots, two engineers and a load master, the person charged with maintaining the equal distribution of weight across the jet. The cargo was mainly vehicles and the plane was en route to Dubai, it arrived at Bagram from France on Friday 28 April.

2. Weather May Have Been A Factor

A thunderstorm with Cumulonimbus clouds was approaching the air base at the time of the accident.

Several observers on the ground reported the National Air Cargo Boeing 747-400 had just lifted off and was climbing through approximately 1200 feet when it’s nose sharply rose, the aircraft appeared to have stalled and came down erupting in a blaze.

According to the Daily News, the U.S. National Transportation Safety Board along with the Afghanistan Civil Aviation Authority are investigating what caused this tragedy.

3. The Flights Was Operated by National Airlines

President Obama at Bagram Air Base in 2012.

A company based in Orlando, Florida. The “About” section of their website describes them as:

At National, our corporate philosophy has always been very straightforward — the customer always comes first. Period. In addition, the National team thrives on opportunities to accept shipping challenges that push their skills to the limit.

National’s rapid response and shipping reach have generated many demanding missions from military urgency to disaster emergencies, often in the most perilous situations and the world’s most remote regions. Whether a country to serve, a business at stake or people in need, National has been there… ready and able to respond.

National Airlines provides air travel and transportation to hundreds of companies and corporations around the nation and around the globe.

The Taliban have claimed responsibility for the downing of the plane. They issued a statement saying they had shot down a U.S. plane at around 4 p.m. local time, though officials refute this. Lt. Quenton Roehricht, of the International Security Assistance Force, told reporters:

At this time, we can confirm there was no insurgent activity when contact was lost

5. This Comes on the Back of a Renewed Taliban Threat

The Taliban announced over the weekend that they will pursue an aggressive “spring offensive.”