The Bank of Canada unveilled the newest notes in its polymer line-up today, with a special reveal ceremony from outer space. Here’s what you need to know.

Taking part in a live stream, Canadian astronaut and commander of the International Space Station, Chris Hadfield debuted Canada’s newest currency along with officials in Ottawa.

“I try to inspire young Canadians to aim high. This new $5 bill should do the same,” Hadfield said. “By giving prominence to Canadian achievements in space, this bank note reminds us that not even the sky is the limit.”

(via Bank of Canada)

The Bank of Canada says that both notes will begin circulating in November 2013 at the same time. The updated tender will join Canada’s current roster of polymer bills in $20, $50 and $100 denominations.

(via Bank of Canada)

The new $5 bill features images of Canadarm2 and Dextre, Canadian robotics innovations and contribution to the International Space station. The reverse side shows an image of former Prime Minister Sir Wilfrid Laurier.

The new $10 bill pays homage to Canada’s rail history and features an image of The Canadian train journeying through the Rocky Mountains, with a portrait of Sir John A. Macdonald, Prime Minister at the time of the railway completion, on the reverse.

Like the other bills in the Bank’s line-up, the new $5 and $10 notes feature cutting-edge security features to protect against counterfitters. Raised ink, metallic portrait and hidden numbers are just some of the security features. 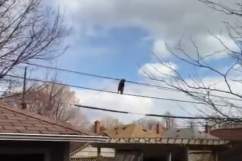 Thanks to the unique material and design, the polymer bank notes last at least two and a half times longer than the cotton-based paper notes currently in circulation. They cost more to make but will be able to be recycled in Canada.