Twitter is abuzz with a ban for “blood strawberries” after reports of violence against migrant workers emerged from Greece.

Two Greek foremen are under arrest and one is still on the run after allegedly shooting nearly 30 migrant strawberry farm migrant workers in Maloada, Greece, who were demanding back pay.

The supervisors were believed to have opened fire on Wednesday at a crowd of about 200 mostly Bangladeshi immigrants who were demanding wages that had not been paid, police said. The wounded were taken to hospital but none of the injuries was serious.

A video taken just after the shooting has surfaced on YouTube. Watch below, and definitely NSFW:

Anti-foreigner sentiment has been on the rise in Greece due to a declined economy and high rate of unemployment.

Fortunately none of the injuries were serious. Unfortunately, violence against migrant workers seems to be a common theme in Greece and there have been calls for political action in the recent past.

A campaign to ban strawberries from the Manolada, Greece, where the attack occurred, has begun to trend on Twitter, falling under the hashtag “bloodstrawberries.”

Some of the tweets reference the poor working conditions for the migrant workers, comparing them to modern day slavery and Ancient Greece’s history with the slave trade.

Modern Greece has many things in common with Ancient Greece. For example slaves. #manolada #greece #bloodstrawberries

While others call for an outright ban of the #bloodstrawberries.

What has this world come too, don’t buy any strawberries from manolada Greece! #bloodstrawberries #rip

But for Americans who wish to take part in the campaign, it may prove difficult: nearly all of the strawberries imported into the U.S. annually come from Mexico. However, that doesn’t mean we can’t shed some light on the plights of our own southern-based migrant workers. 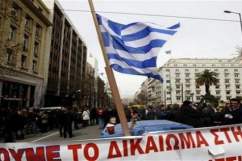 Greece Goes on Strike for 24 Hours to fight Austerity

Loading more stories
wpDiscuz
0
0
Would love your thoughts, please comment.x
()
x
| Reply
Twitter is abuzz with a call to ban strawberries from Manolada, Greece after nearly 30 Bangladeshi migrant workers were shot for demanding back pay.