It’s been well publicized that the Boston bombers were not cash-rich. Yesterday, we learned that older brother Tamerlan Tsarnaev, a stay-at-home dad, received welfare benefits until 2012.

Now, according to a Boston Globe report, at least three students at the University of Massachusetts Dartmouth have told investigators they bought pot from Dzhokhar, the younger brother, who was enrolled at the school with the help of a $2,500 scholarship from the city of Cambridge.

Did weed sales fund the deadly terror attack on the Boston Marathon?

The bombs used in the attack, which killed three and injured hundreds, were low-tech devices made from common materials including a pressure cooker, fireworks and hobby-shop batteries. The remotes used to detonate the bombs were called “unsophisticated” by investigators. 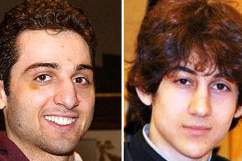 Tsarnaev Brothers Were Headed to NYC to “Party”

It’s estimated the bombs would have cost about $100 each to assemble. The going price for marijuana in the Boston area is between $222 and $371 for an ounce, according to priceofweed.com.

Loading more stories
wpDiscuz
0
0
Would love your thoughts, please comment.x
()
x
| Reply
Did drug-dealing pay for the carnage in Boston?