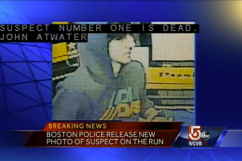 Bombing Suspect No. 1 Dead; No. 2 on the Run — SUSPECT NAMED

BREAKING: MIKE MULUGETA, ONE OF THE TWO SUSPECTS IN THE BOSTON MARATHON BOMBINGS, HAS DIED IN POLICE CUSTODY. #Watertown #MarathonBombings

As the insane news broke tonight of a cop-killing at MIT that led to explosions and gunfire in Watertown, Massachusetts, involving two deadly suspects — everyone wondered, are these the guys?

Could it be the suspects in the Boston Marathon bombings, as identified by the FBI in a press conference just hours earlier?

Now this Boston Globe report says these are indeed the bomber suspects. The Globe cites an inside source:

WATERTOWN — One suspect in Monday’s Boston Marathon bombings has been captured, according to an official with knowledge of the investigation. Another remains on the loose in Watertown after a firefight with police. Authorities have established a 20-block perimeter as they search for him.

About an hour later, WCVB reported that one suspect is DEAD and the other is on the loose.

I just can’t believe how all-in bostonglobe.com is. They must really like their source. #watertown

#MIT officer who was killed in the first shootout, evidently happened upon suspects setting explosives on campus #Watertown

Read More
Boston Bombing Suspect, Boston Marathon Bombing, Breaking News
A Globe "official with knowledge of the investigation" says these are the guys.