According to CIA Counterterrorism Director Larry Johnson, the type and timing of the devices used in the Boston Marathon bombing bears the “hallmark of al-Qaeda.” Although there is no concrete evidence to suggest the origin of the attack was either domestic or international, Johnson said that the bombs used (pressure cookers) are popular on the India-Pakistan border and are favored by al-Qaeda militants, reports Mediaite.com.

“It’s important to note that that particular model – that type of explosive has been very popular along the Pakistan-India border,” Johnson said.

One of the first photos obtained of one of the Boston Marathon bombs. 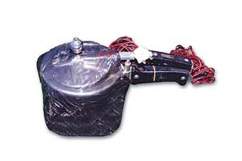 Johnson also said that the bombs, timed to go off at approximately the same moment, were also most likely constructed by an organized terrorism group, rather than just some crackpot.