Former Ravens linebacker Brendon Ayanbadejo responded to a Newsday report claiming that he was cut from the NFL because of his advocacy for gay rights, saying that it had nothing to do with that and he was, in fact, cut because of his age.

Ayanbadejo’s contract was terminated by the Ravens on Thursday after playing five years with the team. He originally told Newsday that he was cut because of his activities off the field, a statement that could easily be interpreted as for his prominent involvement in gay rights.

“My bark is louder than my bite,” Ayanbadejo told Newsday. “I make a lot of noise and garner a lot of attention for various things off the football field. When that starts happening, why do you have that player around?”

However, after his interview, the football player took to Twitter to clear the air.

Just a heads up I did an interview today and no way said I was cut because my views. I said my talk was louder than my production & at 36

Ravens spokesman Kevin Byrne also made a statement saying that the team has always respected Ayanbadejo’s views and that he was purely cut for football reasons.

“I think it will happen sooner than you think,” Ayanbadejo said. “We’re in talks with a handful of players who are considering it. There are up to four players being talked to right now, and they’re trying to be organized so they can come out on the same day together. It would make a major splash and take the pressure off one guy. It would be a monumental day if a handful or a few guys come out. 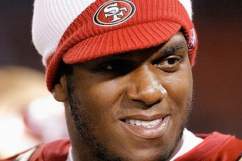 Loading more stories
wpDiscuz
0
0
Would love your thoughts, please comment.x
()
x
| Reply
The former linebacker said that he was cut because of age, not because of his advocacy of gay rights.