An aerial view of the construction site that left two children buried under dirt and clay.

Tragedy struck a North Carolina home on Sunday when a construction site collapsed on two children playing at the bottom of a 24-foot deep hole, reports The Washington Post. Emergency crews feverishly dug for hours before reaching the children, cousins, but it was too late. Here’s what you need to know about the heartbreaking incident.

1. Jordan Arwood Was Digging With a Backhoe


Jordan Arwood, 31, was digging a two-story deep hole on his property with a backhoe when the disaster struck. The pit, which is said to have supposed to be a bunker for his family, measured 20 feet by 20 feet with a sloped entrance leading down to a 24-foot bottom.

2. The Children Were Playing in the Pit When It Collapsed
The two children were playing at the bottom of the pit, reportedly retrieving a child-sized pickaxe, when it collapsed.

3. Arwood Begged Authorities to Rescue His Buried Daughter and Her Cousin

In a heartbreaking 911 call, Arwood begged authorities to hurry to rescue his buried daughter and her cousin. He even started praying during the hopeless situation.

When the dispatcher asked Arwood if he could see the children, he said he couldn’t.

“The entire wall collapsed on them,” he said. “Get a crane. Get a bulldozer. Get anything you can, please. There’s no way they can breathe.”

As the dispatcher began encouraging him, Arwood began to pray.

“Lord lift this dirt up off these children so the children will be alive and well,” he said. “I have to get my kids. Lord, please.”

4. It’s Not Known If Arwood Had a Building Permit
Sheriff David Carpenter said authorities did not know if any permits had been issued for the construction project, but deputies would be investigating with the county planning and zoning officials about any potential building code violations.

5. The Bodies of the Children Were Dug Out Monday


Emergency crews had been searching for the children, identified as James Levi Caldwell, 7, and Chloe Jade Arwood, 6, since Sunday afternoon, but didn’t find their bodies until early Monday morning. 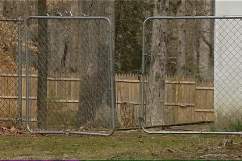