It’s another chapter in the troubled history of the Carnival Triumph cruise ship. Reports are saying that the ship has broken free from the docks in Mobile, Alabama, following strong winds, that reached 41 miles per hour.

Two workers are believed to have fallen into the water following the accident, and one of those workers is missing. 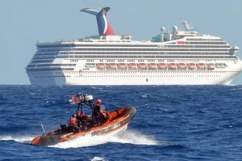 Due to strong winds in Mobile, Ala., Carnival Triumph, which was docked at a Mobile shipyard, broke away from its moorings, the ship drifted and is currently resting against a cargo vessel. Tug boats and the U.S. Coast Guard are on site.

The ship drifted around the mooring area, hitting an army boat and then hitting some rocks. Nobody else is believed to have been hurt.

Loading more stories
wpDiscuz
0
0
Would love your thoughts, please comment.x
()
x
| Reply
One worker is missing after the collision.