1. He was a Graduate of Michigan State

Originally from Detroit, he was born there in 1933 and attended Charlevoix High School, he graduated from Michigan State in 1955. There he played football under the school’s legendary coach Biggie Munn winning a national championship in 1952. That same year he went on to coach Ishpeming High School in Michigan.

2. He Spent Many Years as an Assistant Coach

He spent four years assistant coaching at Arizona state, the University of Houston, and Oklahoma, eventually he worked his way up to Sooner head coach.

After he left Oklahoma for the New England Patriots, the college became embroiled in a recruiting scandal that occurred while he was coach. Sports Illustrated wrote in 1973 about the scandal:

Oklahoma Athletic Director Wade Walker announced that the high school transcripts of Kerry Jackson, first-team quarterback this spring [and the team’s first black quarterback], and Mike Phillips, squad member, both freshmen who had gone to Ball High School in Galveston, Texas, had been altered. He said Oklahoma offensive line coach Bill Michael had admitted knowledge of the changes, but that Michael had not participated in the actual alteration.

SoonerSports.com says of his time:

Fairbanks was the first OU coach to use the wishbone formation, a triple option offensive attack that Texas used on its way to the 1969 national title. The wishbone became the backbone of OU’s offensive dynasty for the next 20 years.

Watch the classic Thanksgiving clash between the Sooners (2) and Nebraska (1) from 1971:

4. He Turned the Patriots into Contenders

Fairbanks left Oklahoma in 1973 just after a Sugar Bowl win to take charge of the New England Patriots, then a struggling franchise. He made five great pre-season trades in 1974, bringing in Steve Grogan, Mike Haynes, John Hannah, Sam Cunningham, Mosi Tatupu, Ray Hamilton and Darryl Stingley, and with the Patriots looking ready to challenge, the league went on strike. His final record in New England was 46-39, with two playoff appearances.

5. He Often Found Himself Fighting With the Management

Fairbanks had trouble negotiating contracts for his players, due to a poor relationship with then-team owner Billy Sullivan and his son, also named Chuck. Fairbanks had promised offensive linemen Leon Gray and John Hannah lucrative contracts in 1977, but the Sullivan didn’t agree to the sums of money both players were offered and canceled the deal. Fairbanks’ supporters claim this made his job untenable.

6. He Controversially Signed with the University of Colorado During the 1977/8 Season

When the Patriots looked ready to make a Super Bowl run in 1978, Fairbanks was suspended as coach for accepting the head coach position at Colorado. New England lost to the Oilers in the first round of the play-offs, a legal battle ensued and Colorado had to pay $200,000 to the Patriots to buy Fairbanks out of his contract. 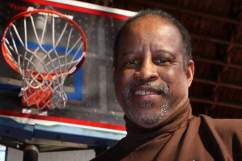 7. His Time at Colorado was Unsuccessful

While he was coach of Colorado, he oversaw a change in the color of uniforms, which proved to be an unpopular move. He had brought into to resurrect a failing program but failed, in three years his team went 7-26.

8. In 1982 Fairbanks Became a Coach in the Fledgling USFL

Fairbanks took the opportunity in 1983 to become President, 7% owner and coach of the New Jersey Generals in the USFL.

After just one 6-12 season, Donald Trump swooped in and bought the Generals, including Fairbanks’ stake, he was replaced as coach by former New York Jets’ coach Walt Michaels.

Fairbanks spent the following years in semi-retirement, occasionally advising the Dallas Cowboys and working in some real-estate in Arizona.

In 2007 Bill Belichick recruited Fairbanks to come and talk to his then-undefeated Patriots. Belichick said of Fairbanks in September when the former coach was diagnosed with a brain tumor:

We want to pass along our best wishes to Chuck Fairbanks, Chuck is headed into some surgery today. I just want to pass along our best wishes to Chuck and his family. Chuck has been a good friend for a long time, and he’s meant a lot to this organization. Really, at the time he came here, he did a great job in turning the Patriots around, making them into one of the top teams in the AFC. Also, some of the things he brought to the Patriots and the league in the ’70s were things that stood the test of time and have been a big principle of this league for many, many years and the disciples and the people that were with him, such as the 3-4 defense, the way he organized the draft, personnel meetings, things like that and some of the great coaches that were here under Chuck.

10. He’s the Second NFL Coach to Die in Two Days

This comes a day after former Texas A&M and Chicago Bears coach Jack Pardee passed away.