Fox is reporting that a woman has been found dead on the train tracks at the Canal Street station in New York City.

There is no word if she was hit by a train or her body was just left on the tracks.

The Metro Transit Authority’s website has reports of trains being shut down:

Due to a police investigation at Canal Street, southbound 1 trains are terminating at Times Square-42 Street at this time.

UPDATE: The woman’s body was found today around 1:15 PM, but reports are saying it may have been there a while as she was found in clubbing clothes, according to NY Daily News. 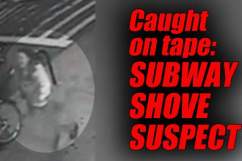