Dr. Richard Wolfe is the head doctor at the hospital that saved the live of Boston Bombing suspect Dzhokhar Tsarnaev.

When Boston Bombing suspect Dzhokhar Tsarnaev was rushed into the Beth Israel Hospital emergency room last week, some doctors were faced with the anguish of saving the life of the person who may have been responsible for the death of three people, including an 8-year-old boy.

Dr. Richard Wolfe, head of emergency medicine at Beth Israel Deaconess Medical Center in Boston, said that some of his nurses battled second thoughts and anxiety over saving the life of the suspected bomber, reports the New York Daily News.

“They look on the perpetrator as someone absolutely horrible and ask themselves, ‘What have we done? We just saved him,’” Wolfe said. “Some nurses started rethinking. They think of the mom who just lost her son, or a child with an amputation.”

The living suspect of the bombing at the Boston Marathon on April 15, Dzhokhar Tsarnaev, was rushed into the same hospital where his brother was pronounced dead a day earlier. Wolfe said that although his medical team was conflicted about treating the suspect, they acted professionally, knowing that authorities would be waiting for him to recover so they could continue on with the investigation.

Some of the victims injured in the explosions at the Boston Marathon were even being treated at the same time in the same hospital. 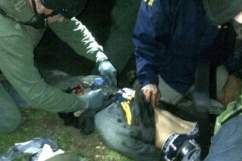 Loading more stories
wpDiscuz
0
0
Would love your thoughts, please comment.x
()
x
| Reply
"What have we done?" the doctors and nurses treating the Boston Bombing suspect thought. "We just saved him."