Dylan Quick is the 20-year-old Lone Star College student who is allegedly responsible for randomly stabbing 14 other students on campus, critically injuring two. As the story develops, investigators are unearthing disturbing details behind the attack, including a confession by the suspect that he had thoughts of killing people since he was in elementary school and that he fantasized about cutting people’s faces off and wearing them as masks.

Here’s what you need to know about Dylan Quick.

2. The Incident Started in a Lab at the Health Sciences Building


The violent attack started in a lab in the Health Sciences Building of the Cy-Fair Campus and spread to the outside of the building. Lone Star student Margo Shimfarr-Evans said she just left the building when she found out that a classmate had been stabbed.

“It happened in the hallway, we have a lab and lecture, and down the hallway it’s all lab classes and a classmate in the lab class got stabbed,” she said.

Police said that it was a random “building-to-building” attack, but it is unclear how many buildings or classrooms were involved.

3. He Used a Razor Blade


A victim is seen being transported by a helicopter to an outside hospital.

Quick carried out the stabbings with an X-acto knife. The suspect was so violent that pieces of the razor blade he used were lodged in at least one of the victims. Court records show that in the week leading up to the attack, Quick began sharpening household items, such as pencils and hairbrushes, to use as weapons.

4. Two Victims are in Critical Condition


Two students were left in critical condition after the attack, while four were reported to be in fair condition, reports the New York Daily News. Four were flown to outside hospitals by helicopter and others were treated at the scene.


Fellow Lone Star College student Steven Maida was walking to his car when he found out that someone was going around stabbing people on campus. He and a group of others reacted quickly to the news and chased the suspect. They finally caught up to him and pulled him down by his backpack.

6. Maida Posted a Picture of Quick to His Instagram


7. The Suspect Told Investigators He Planned the Attack for Some Time


The Houston Chronicle reports that Quick told investigators that he had planned the attack for quite some time and that he had fantasized about killing people since he was in elementary school. Quick also allegedly told a man in the Cy-Fair jail that he wanted to go on a “killing spree,” but his knife’s blade broke.

8. He Also Fantasized About Cutting People’s Faces Off and Wearing Them as Masks


As new developments in the story emerge, the details of his fantasies get even more gruesome. According to a search warrant obtained by the Houston Chronicle, Quick reportedly told investigators that he fantasized about cannibalism and necrophilia. He was also obsessed with several serial killers. As authorities searched the home of the suspect, they found several books about serial killers and a Hannibal Lecter mask, modeled after the one the fictional cannibal famously wore in the movie. Quick reportedly had his own fantasies about cutting off people’s faces and wearing them as masks.

9. The Suspect Was Born Deaf

Quick was home schooled as a child after being born deaf. At the age of seven, he received a cochlear implant that improved his hearing.

“The first few years after receiving the implant, Dylan says he was busy learning English, just as if he were an ESOL student,” an article featured on a Lone Star College blog read, but has since been removed.

His mother, Tiffany Quick, sent him to library classes at the college as a teen because she feared that he was not getting enough socialization.

10. Quick Has Been Charged With Three Counts of Aggravated Assault

Quick has been charged with three counts of aggravated assault. If he is convicted of a first-degree felony, he faces life in prison, but his defending attorney, Jules Laird, wants the suspect to be examined by mental health professionals before moving forward. Currently Quick is being held without bail. 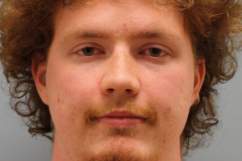 Lone Star Slasher’s Fantasy: ‘Slice Off Faces and Wear Them as Masks’