Craig MacTavish was named the Edmonton Oilers’ new General Manager at a press conference on Monday, after Steve Tambellini was given the boot. Here are 5 things you need to know about MacTavish.

1. He’s Making His Return to Edmonton

Captain Horcoff says “accountability” is one of new GM Craig MacTavish’s best qualities. “We need to take that next step.”

MacTavish was coach of the Edmonton Oilers four years ago, with his tenure ending four years to the day as his return to the club was announced. During his departure, MacTavish earned a master’s degree in business from Queen’s University and was an NHL analyst for TSN for two years.

2. He’s the Fifth GM of the Oilers

Having spent the last year as Sr. Vice President of Hockey Operations for the Oilers, MacTavish was named the club’s fifth general manager at a press conference on Monday April 15. He’s replacing Steve Tambellini, who held the position since 2008.

MacTavish was diagnosed with non-Hodgkins lymphoma not long after ending his coaching stint, but has remained symptom- and treatment-free, saying on Monday that his physical health was good. 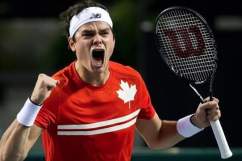 4. Long History With the Club

“The future of this organization has their hearts in the right place, and that gives me energy every day.” – Coach Krueger

According to his biography on the team’s website, MacTavish “has a 17-13 (.567) record in the Stanley Cup Playoffs and became the third coach to lead the Oilers to the Stanley Cup Final.”