His daddy had told him that only a fool never changes his mind, and Elwin Wilson didn’t want to be a fool. A former Ku Klux Klan supporter, Elwin Wilson spent the last years of his life searching for atonement.

Wilson was guilty of participating in cross burnings, cantaloupe throwing, and violent racist acts in the throes of the civil rights movement. Surprisingly, it is not his hate that made history. Soon after President Obama was inaugurated in 2009, Wilson publicly apologized for his actions and sought to gain the forgiveness of those he hurt most.

Wilson’s story is more than a story of reformation. He, in some way, mirrors the evolution of the United States over last few decades — a country that was rampantly segregated in 1960s but elected a black president in 2007. Here’s what you need to know about the KKK member turned peacemaker:

1. He Died of Complications with the Flu


Wilson is believed to have died after a bout with the flu and after years of problems with his heart and lungs. He was pronounced dead at Piedmont Medical Center in Rock Hill, South Carolina. He was a native of Gaston County, North Carolina, and a veteran of the U.S. Air Force, according to an obituary on a funeral home website.

Wilson loved to collect antiques, especially clocks. He is survived by his wife, a son, two grandchildren and a great-grandchild.

As Wilson Approached death, he thought he would need to change his beliefs if he wanted to make it to heaven. In an interview with the Associated Press in 2009, Wilson stated:

“All I can say is that it has bothered me for years, all the bad stuff I’ve done, and I found out there is no way I could be saved and get to heaven and still not like blacks.”

3. He Was Guilty of Many Racist Acts


He admitted to participating in Cross burnings, hanging a black doll in a noose at the end of his drive way, flinging cantaloupes at black men walking down Main Street, and hurling a jack handle at a black boy in his dad’s gas station. But Wilson was most infamous for participating in the brutal beating of future U.S. Rep. John Lewis at a bus station in 1961.

4. He Violently Attacked a Civil Rights Leader Who Became Congressman


John Lewis was violently attacked at a bus station in 1961 by a group of men after he walked into a whites-only waiting room. Lewis — who had become a prominent civil rights leader — suffered from severe injuries. Years later, that beaten black man became a Georgia representative. Although Lewis received a formal apology from the police chief and governor last month, John Lewis was the only man who personally met with Lewis and apologized. “He was the very, very first to come and apologize to me,” John Lewis told South Carolina’s Rock Creek Herald for its obituary of Wilson, referring to an incident at a bus station in the city. “For a private citizen to come along and say, ‘I’m the one that attacked you; I’m the one who beat you,’ it was very meaningful…. His story and the way he arrived at his position must be understood, must be told.”

5. Wilson Was Very Public About His Regret
Ex-Klansman Elwin Wilson 'I'm sorry'Former Klansman Elwin Wilson apologizes to the "whole world" for beating Rep. John Lewis long ago.2009-02-08T14:51:29.000Z
Wilson apologized in several public venues, including during a meeting with Lewis at the congressman’s Capitol Hill office. They also told their story on The Oprah Winfrey Show. In an interview with Don Lemon on CNN, Wilson said:

My daddy always told me that a fool never changes his mind, and a smart man changes his mind. And that’s what I’ve done, and I’m not ashamed of it. I feel like I’m apologizing to the world right now. 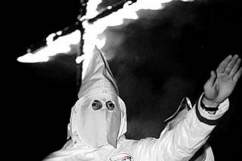