Eric Murdock is in an excellent position to say “I told you so.”

And the former assistant coach of the Rutgers basketball team is saying it in the form of a lawsuit.

Murdock claims he was fired for raising the very concerns that led to this week’s termination of head coach Mike Rice and the resignation of athletic director Tim Pernetti — which both came after Murdock leaked to ESPN a video of Rice throwing balls at players and slinging curses and anti-gay slurs.

Murdock, a former NBA player, was employed as the director of player development until he was fired last July 2.

Read the suit below. 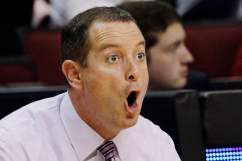 Loading more stories
wpDiscuz
0
0
Would love your thoughts, please comment.x
()
x
| Reply
The whistleblower who leaked the video that got Mike Rice fired says he was canned last year for complaining about Rice's behavior.