Heather Abbott is one of the scores of people injured in the Boston Marathon Bombing on April 15 that killed three people, including an 8-year-old boy, and was forced to amputate her left foot, reports The Boston Globe. Although she was faced with the life-altering decision, she was all smiles from her hospital bed at a press conference on Thursday. Here’s what you need to know.

1. Heather Abbott Was Injured in the Boston Bombing


The 38-year-old was standing outside the Forum bar and restaurant when the second bomb went off, shattering her left foot an ankle.

“I felt like my foot was on fire,” Abbott said as she recalled screaming for help before being taken to the hospital. “It was very scary. I didn’t know what was going to happen to me.”

2. Amputating Her Left Foot Was Her Best Option


Abbott was rushed to Brigham and Women’s Hospital where surgeons initially saved her left foot by grafting blood vessels from her right leg. However, over the next few days it became clear that the chances her foot would fully recover were dwindling. Doctors told her that she was badly mangled and that her left leg would be shorter than her right. Several people who had lost their lower legs met with Abbott, sharing with her their own experiences. Many told her that they regretted not amputating their limbs sooner because they endured years of pain attempting to salvage them. Ultimately, she decided that amputating her left foot was her best option.

However, Abbott says that the decision to amputate her foot was the best way to resume her active life, from aerobics to zumba.

3. She Works in HR
Abbott is a Newport, Rhode Island resident who works in human resources for Raytheon, an American defense contractor and industrial corporation.

4. Abbott is One of 16 Victims to Have Had Legs or Feet Amputated
She is not the only one whose life has been dramatically altered due to the attack. Abbott is one of 16 victims, including Adrianne Haslet-Davis, who also lost her left foot.

5. Michelle Obama Visited Her in the Hospital


On the same day of the blast, first lady Michelle Obama visited Abbott. She gave her a “challenge coin,” a token usually given to wounded service members and their families. 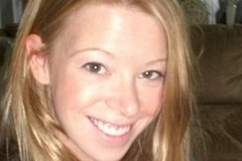 Loading more stories
wpDiscuz
2
0
Would love your thoughts, please comment.x
()
x
| Reply
Although the Boston Bombing victim made the life-altering decision to amputate her left foot, she was all smiles at a press conference on Thursday.