The legendary comedian Jonathan Winters has died at age 87 in Montecito, California. He passed away overnight surrounded by family and friends.

Here’s what you need to know about the legend…

Winters was born and raised in Dayton, Ohio. After serving in the Pacific campaign for the Marines during World War II, he returned home to attend the Kenyon College and Dayton Art Institute, he studied cartooning.

2. He Quickly Became a Local Celebrity

He got his start doing short comedy routines on college radio in Kenyon, WKCO, and later into small market stations in Dayton and Springfield, Ohio.

3. He was an Early Tonight Show Favorite

His comedy album, released under the Verve label, made him a favorite of both Jack Paar and Johnny Carson, he appeared on some of the earliest episodes of The Tonight Show.

He was one of the comedians chosen to roast Johnny Carson on Dean Martin’s show in 1983.

4. He was Known for his Array of Characters

His most famous character being Maude Frickert, a seemingly sweet old lady with a sharp tongue. Many of his character, like Frickert, were based on people that Winters new growing up in depression area Ohio.

He also made many TV appearances with Dean Martin, Mork & Mindy and in an episode of The Twilight Zone.

In Mork & Mindy , Winters played Mork’s (Robin Williams) son, in the show, Mork’s race, the Orkans, their children were born, or hatched, old. Winters made his debut in this episode:

7. In 1999, he won the Prestigious Mark Twain Prize for American Humor

He was the second recipient of the award (after Richard Pryor). Winters was honored that night by Robin Williams, Andy Dick, Steve Allen, and Richard Belzer.

8. Most recently he voiced Papa Smurf in the Smurfs Movies

In 1980s, he also voiced the character of Grandpa Smurf in the Smurfs’ TV series. Winters was cast in the first movie in 2010 alongside Kate Perry and George Lopez.

Winters’ credited his wife as being the biggest influence of his career. Encouraging him to go to New York to work on The Tonight Show and also insisting he take the role in It’s a Mad Mad Mad Mad World.

10. He Was One of the Most Influential Comedians of All Time

…Jack Paar hands Winters a stick about 3 feet long and tells him to make comedy. Winters looks at if for just an instant, then whips it out in front of him, making a casting reel sound — he was always gifted at sound effects. In a comfortable vacationer’s voice, he says, “Well, that was a pretty good cast, wasn’t it Bob? I think we’re on to something.”

Then, a look of alarm out into the distance. “I’m sorry, Margaret, try to swim in.”

The studio audience roars, which must have given Winters a clue for the next stick bit — a lion tamer’s whip complete, again, with sound effects. Then the stick becomes a teacher’s pointer, a spear, a golf club and a dozen more props.

The quicksilver improvisations, countless characters and mercurial changes of mood and expression led people to dub Winters a “wacky genius.” 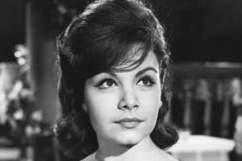