Hillsborough SO: #Hakken family boarded sailboat and could be in Gulf of Mexico #breaking #AmberAlert #Florida

An anti-government couple who kidnapped their kids by tying up the grandmother have ditched their getaway vehicle, boarded a boat, and are somewhere in the Gulf of Mexico with their two young boys, according to the latest information from the Hillsborough County Sheriff’s office in Florida.

The father, Joshua Hakken, is known to be an avid sailor, identifying himself as “Sailing Bull” on at least one Internet forum. The boat is reported to be a 25-foot 1972 Morgan Sailboat.

Photo of the Hakken Family’s Morgan Sailboat. Photo via The Tampa Bay Times. 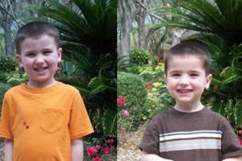 Kids Kidnapped by Parents in Tampa: Top 10 Facts You Need to Know

On Thursday the family’s pickup truck was found in Madeira Beach, Florida, about 30 miles from Tampa, where Joshua Hakken and his wife Sharyn are believed to have kidnapped their children, Cole and Chase, 2 and 4, from the boy’s grandmother, Patricia Hauser, “My son-in-law just kidnapped my two grandchildren,” Hauser told the 911 responder. “He tied me up.”

…the 1972 Morgan sailboat has a blue hull with the name “Salty,” a picture of a paw near the back of the hull on each side and “St. Petersburg” in white lettering on the stern. The boat also has a blue Bimini top, and when the sail is unfurled it is white with blue trim. There is possibly a yellow horseshoe life preserver on deck.

My Fox Tampa Bay is reporting that Joshua Hakken bought the boat just prior to the alleged kidnapping.

Loading more stories
wpDiscuz
1
0
Would love your thoughts, please comment.x
()
x
| Reply
Avid sailor Joshua Hakken, accused of kidnapping his children and tying up their grandmother, may have taken his family out on the water.