Forty-five-year-old Kevin Purfield allegedly took it upon himself to harass the Aurora, Colorado shooting victims’ families through e-mail, social media and phone calls.

Here’s what you need to know about Purfield, his alleged crimes, and his arrest.

1. Purfield is “Mentally Ill”
Koin 6 News reported that Kevin Purfield of Portland, Oregon, was arraigned on April 11 for making several harassing phone calls to the Aurora, Colorado, movie theater victims’ families. He was first arrested on April 10 on the block of 1100 Northeast Portland. Purfield has pleaded not guilty to five counts of telephonic harassment and one count of stalking. He is now being held on $100,000 jail bond. Both the prosecutor and the Purfield’s defense attorney stated in court that the man is mentally ill.

3. Some of The Phone Calls Used Foul Language
PPB (Portland Police Bureau) spokesperson Sgt. Pete Simpson stated that none of the phone call contacts were threatening, but they were certainly unwanted. Purfield reportedly used used foul language when speaking to the families, he said.

4. He Has a YouTube Channel
Purfield actually has an official YouTube page, which contains videos about his conspiracy theories as they relate to the Aurora, Colorado movie theater shooting and the Sandy Hook school shooting.

The above video delves into Purfield’s belief behind his theories regarding the Aurora, Colorado theater shooting. This description notes that Purfield made a call to Gregory Medek, who lost a family member due to the shootings:

November 23, 2012 when I told Gregory Medek over the phone there is a military moon base he angrily asked if “they” referring to his daughter Micayla and other people reportedly killed in the theater were abducted by aliens.

The moon base name is Project Horizon. July 20th the day Apollo 11 landed on the moon in 1969. Several people told me about the base. Philip J. Corso Jr. of Fort Pierce Florida, his father was chief of Army technology until 1963. His father was in charge of Operation Paperclip for President Eisenhower. Dr. Bill Deagle worked at Peterson Air Force base in Colorado. He was told about the moon base from the military people he treated. The fleet of ships is named Aurora. This is what Dr. Deagle told me in 2008.

People are missing from the theater shooting. The police are lying, the medical examiner is lying, the family members are lying, the Governor is lying and nobody in the media that I contact will run the story.

October 19, 2012 I was handcuffed and mentally and physically abused by three Portland Oregon police officers. I was repeatedly told I needed to be hospitalized and placed on medication for mental problems.

6. He Believes the Aurora Shooting is Fake

In another video post, Purfield can be seen explaining that he thinks the movie theater shooting didn’t really happen and that it was all fake.

7. He Maintains There Was No Evidence Found for the Sandy Hook Shooter

Another one of Purfield’s videos shows him stating that the Sandy Hook shooter, Adam Lanza, wasn’t located at the scene of the crime. He believes that the police found no real evidence of Adam Lanza’s participation in the mass school shooting. Here’s the video description:

No police agency has provided the public any evidence that a man named Adam Lanza killed anyone in Newtown Connecticut. The police have provide no evidence any shooting occurred at Sandy Hook Elementary. All police agencies I have spoken with behave as if they are hiding information. Telling the truth is easy and I have never had an easy conversation with anyone in Connecticut.

Bill McCarren is the General Manager of the National Press Club in Washington DC. He lives with his wife in Chevy Chase Maryland at 4832 Leland Street.

Sally Cox uses the name Sarah Cox and she lives in Newtown. She is not returning people’s calls. Andrea McCarren is refusing to reply to anyone that asks about Newtown Connecticut.

Police agencies in Connecticut have not released any evidence that a man named Adam Lanza killed anyone. Evidence is what is needed to prove what happened.

If the school nurse Sally Cox told Andrea McCarren that she saw the shooters face and the shooter was not Adam Lanza that is significant to the case and what really happened on December 14 at Sandy Hook Elementary in Newtown Connecticut.

8. He Claims He Was a Victim of Police Brutality

Purfield made a video about the apparent police brutality he experienced at the hands of Portland, Oregon police. His personal blog page provided some more backstory on what occurred:

October 19, 2012 I was the victim of police brutality in Portland Oregon.
Photos below are of the October 19, 2012 medical report from Adventist Medical Center emergency doctor Emily J. Campagna. I lost the use of my hands and fingers for seven days. Officer Hurlman abused me in the hospital emergency room. My wrists were purple after he twisted my wrists and cut the handcuffs into my skin.

The Portland FBI told me they can’t help me. I hope officers John J. Hurlman and Martin Padilla killed. I fucking HATE how they treated me October 19, 2012. Hurlman and Padilla are still employed and working Portland’s North precinct. FUCK YOU!!

9. He Claimed Christopher Dorner Was “Doing The Lord’s Work”

Purfield put up a video where he can be seen speaking about Christopher Jordan Dorner, the fired L.A. cop and ex-Navy officer who went on a killing spree in February 2013. The above video comes with the title, “Christopher Dorner Doing The Lord’s Work,” and this description:

10. He Made a Video About Both Shootings and the Phone Calls He Made To The Media

One of Purfield’s YouTube videos provides some more info on the phone calls he made regarding the Aurora victims, the Sandy Hook shooting, and the empty coffins he reportedly heard about. 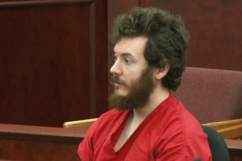 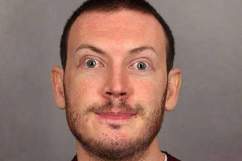