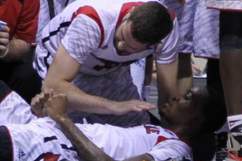 Kevin Ware on crutches after surgery.

After a gruesome on-court injury that resulted in a snapped tibia, Louisville Cardinals player Kevin Ware was back up and walking on crutches on Monday, reports The Washington Post.

Ware was attempting to block a shot by Duke’s Tyler Thornton on Sunday when he awkwardly landed on his right leg, graphically snapping his bone in two places for viewers at home and in the arena to see. Ware was rushed to the Indianapolis’s Methodist Hospital and underwent a two-hour surgery where his bone was reset and a rod was inserted into his tibia.

As of Monday, Ware was back up on crutches, but will remain in the hospital until Tuesday. Ware could be back on the court in as early as six months to a year as long as there is no nerve damage and or other complications that might develop during the healing process.

“Hopefully I’ll be back in time to watch practice,” Ware said. “It hurts but I’ll be fine. I’ll be fine. I jumped and my leg felt kind of funny. When Coach P tried to help me up, he gave me a funny kind of look. I’m looking at him and then I look down and I see my bone sticking out. It wasn’t a hurt feeling. I just went into shock.” 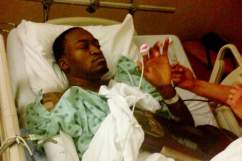 Read More
Basketball, Kevin Ware Leg Injury
After a gruesome on-court injury that resulted in a snapped tibia, Kevin Ware was back up and walking on crutches on Monday.