Chaos, violence and protests wreak havoc in all corners of Venezuela following the contentious presidential elections that took place April 14. After the Electoral Council – composed mostly of government supporters – announced Hugo Chavez’ successor Nicolas Maduro as the winner with a 1% margin, the opposition and its leader Henrique Capriles Radonski immediately called foul saying that there was clear numerical evidence of electoral fraud. As the opposition, the White House, as well as the European Union push for a recount of the votes, government officials refuse.

And so on Monday night people all over the country took to the streets demanding a full recount of the votes. As Nicolas Maduro gave a speech broadcast nationally on TV and radio, protesters banged pots and pans and honked their horns in a traditional sign of protest. Some demonstrations were carried out peacefully while others were met with confrontation and violence. The National Guard as well as pro-government supporters clashed with protesters in many areas. Bullets were shot, people were killed, punches were thrown and tension continues to rise as there is no promise of imminent peace. In fact, many believe this political showdown is only the beginning of a long and arduousness confrontation. 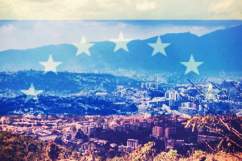 1. Opposition and International Entities Have Not Accepted Election Results

The Electoral Council, which is made up of a majority of government loyalist certified voting results Monday giving a 1% margin for Nicolas Maduro, but opposition Enrique Capriles Radonski says he has evidence that he is the winner. In the October 7 election where Capriles ran against Hugo Chavez and lost with a 10% margin, the opposition candidate accepted defeat.

In his acceptance speech Nicolas Maduro said he was willing to recount the votes of the 79 percent of the Venezuelan population that participated in the April 14 election, the government has since refused to do so even with international pressure. “There will not be any vote by vote recount,” said Diosdado Cabello, the head of the National Assembly and former Chavez ally.

Some 100,000 expatriate ballots- presumed to be heavily pro-Capriles- have yet been counted as part of the tally.
Ricardo Hausmann, professor at the Kennedy School of Government at Harvard told Heavy.com. “The Venezuelan government pays a huge domestic and international price to avoid a recount. Presumably, the benefits must justify the cost.” U.S Senator Robert Menendez, Chairman of Senate Foreign Relations Committee issued a statement urging the Venezuelan government to perform “an audit and full recount…to resolve any concerned, included reported irregularities in select election proceedings.” High profile politicians such as Colombia’s ex-president Alvaro Uribe has openly rejected the Electoral Councils results tweeting: Capriles won with 381,781 votes without counting 100,000 votes from outside the country. The original acts prove it.

People from all over the country resorted to social media sites to publish incriminating photos and videos of government officials and the military the day of elections. #FraudeEnVenezuela (Fraud in Venezuela) became a trending topic on twitter minutes after the Electoral Council announced Nicolas Maduro as the winner late Sunday night. Capriles says his campaign has received more than 3,200 complaints of irregularities during the election.

3. Violence Has Killed at least 7 and Wounded Many More
http://www.nytimes.com/2013/04/16/world/americas/presidential-victory-proves-gloomy-for-nicolas-maduro-of-venezuela.html?ref=americas&_r=1&amp;
Violence has reigned in this deeply divided country. In videos that have been uploaded by citizens on social media sites, it is possible to see the confrontation between the military and government supporters against the opposition’s protestors. Militarization has begun as tanks appeared in Barquisimeto and Palavecino. There are at least 7 people reported dead, 63 wounded and 170 arrested.

In the states of Táchira and Anzoátegui two buildings owned by Hugo Chavez’ political party the PSUV have been burned down.


Nicolas Maduro has blamed opposition leader Henrique Capriles Radonski for instigating violence. Capriles has continued to make calls for peace and peaceful protest. He responded to the fires with the following statement:

“Those that are with me love peace. Nobody should stray from that path. The government wants violence! Don’t get angry…the illegitimate [government] want that!”

The government has since stated that they are carrying a full investigation that could land Capriles in jail for ‘instigating violence’.
Both sides continue to point fingers; blaming each other for the uproar.

Analysts estimated that roughly 1 million voters who supported Hugo Chávez last October—when he won re-election against Capriles—changed sides this time around. Nicolas Maduro’s There is a clear and undeniable shrinking gap between supporters of the government and the opposition; making the country more clearly divided than ever. Many believe that this could be the beginning of the end of Hugo Chavez’ political party as numbers indicate a clear decline in support.

5. Protests Are Expected to Continue Throughout the Week

Protesters on the streets of Caracas

As of now Tuesday marks a full day of protests in Venezuela. The opposition has called for a peaceful political march Wednesday. Protests also continue to percolate in cities outside of Venezuela, such as Miami, Washington D.C and New York. During the New York protest, people chanted “Where is my vote?” Referring to the 100,000 ballots that were cast outside of Venezuela that have yet to be counted by the Electoral Council

The objective of Wednesday’s opposition march in Caracas is to deliver a letter to the electoral authorities for a constitutionally allowed recount. The head of the Electoral Council has stated that a recount will not be processed. Nicolas Maduro has not only “prohibited” the “peaceful march” but has has promised to “radicalize the revolution if the protest continue.” Capriles responded to this threat by saying in a televised address, “I ask Maduro if he’s going to radicalize the poverty, the electrical black-outs and the food shortages as well.”

UPDATE: Capriles has stated in a live press conference that there will NOT be a march to the Electoral Council to avoid confrontation.

With the controversial Hugo Chávez gone, Venezuela is on the cusp of a new era. But it remains heavily divided, into two apparently irreconcilable political camps.

Read More
Enrique Capriles Radonski, Nicholas Maduro, Venezuela
This could be the beginning of a potential civil war for the heavily divided Venezuela