Yesterday, Michael Arrington, founder of TechCrunch, published a letter from his lawyer, asking Jenn Allen to retract all statements she’s made about an alleged rape and physical abuse against Arrington.

As we wrote previously, Arrington, one of the biggest names in Silicon Valley journalism, is being accused by ex-girlfriend Jenn Allen of raping and physically assulting her and other women as well. Numerous people, including former friends and current friends, have spoken out in the following weeks in support of either Allen or Arrington. Arrington finally responded to the allegations recently on his blog. For a full recap of the Arrington case, click here.

It doesn’t look like she’ll be retracting those statements though.

Other tweets on Jenn Allen’s account, made recently, claim that Allen got pregnant from the rape.

Below is a copy of the text from UnCrunched, Arrington’s blog. 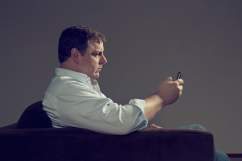 Read More
Michael Arrington, Technology
Follow Heavy ↓
Just hours after Arrington published a letter from his lawyer, his accuser tweets the exact date of the rape.