Tamerlan Tsarnaev and his younger brother Dzhokhar, years before they turned into killers.

The mysterious “Misha,” the man who supposedly had some role in the radicalization of Boston Bomber Tamerlan Tsarnaev, has been revealed.

Described as a red-bearded, Armenian convert to Islam, the previously unnamed man, if you believed the accusations of Tamerlan’s uncle, Ruslan Tsarni, could be blamed for turning a friendly young boxer into a dangerous extremist:

“This person just took his brain. He just brainwashed him completely.” 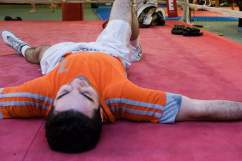 Who is Misha?: Top 10 Facts You Need to Know

But now writer Christian Caryl has found the elusive Misha and published her interview on the New York Review of Books blog. Misha — real name Mikhail Allakhverdov — tells Caryl he did know Tamerlan but had no part in the bombings:

“I wasn’t his teacher. If I had been his teacher, I would have made sure he never did anything like this.”

Misha said he has indeed been questioned by the FBI and “gave them my computer and my phone and everything I wanted to show I haven’t done anything.”

Caryl caught up with him in a small Rhode Island apartment he shares with his parents. His American girlfriend was also there.