One-Third of Air Force Jets Grounded: 5 Fast Facts You Need to KnowThe budget cuts lead to some tangible effects over in the good ol' United State Air Force. More information here: http://www.heavy.com/news/2013/04/one-third-of-air-force-jets-grounded-5-fast-facts-you-need-to-know/ Five Fast Facts You Need to Know is a blazing fast, lighting-response time news series that gives viewers the five most salient pieces of information they need to know about a story. We pride…2013-04-10T20:48:09.000Z

Yesterday saw the beginning of one of the major consequences of that subject that’s been in the news for months: sequestration. Austerity measures began in March due to Congress’ inability to come to an agreement regarding the reduction of the deficit, and now massive defense cuts mean serious implications for the U.S. Air Force. Here’s what you need to know.

1. One-Third of Active-Duty Combat Jets Are Being Grounded


Forced spending cuts have resulted in the U.S. Air Force grounding a third of its active war planes. This means that numerous units, including fighter, bomber, and airborne warning jets, stationed throughout the world, will stand down. 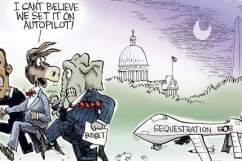 
The cuts in spending are being implemented by flying nearly 45,000 fewer hours during the sequestration. The units that are no longer flying will emphasize ground training and use flight simulators.

3. The Air Force Will Be at “Sub-Optimal Levels”


The reduction of flying hours has resulted in readiness dropping to “sub-optimal levels.” Among the units to stand down are F-16s, F-22s, A-10s, and B-1s, after they return from their deployments. 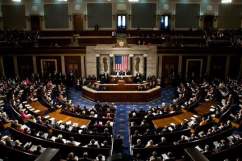 4. No Blue Angels or Thunderbirds Shows This Year!


Meanwhile, the Navy announced that all Blue Angels shows have been canceled for the remainder of the year, following the announcement on April 1 that the Air Force’s Thunderbirds would also not be performing this year.

5. The Department of Defense Was Dealt Some $40 Billion in Cuts


ACC Commander General Mike Hostage said, “We’re entering uncharted territory in terms of how we’ve had to take this year’s cuts and make adjustments to mitigate the most serious impacts.”
Read More
Air Force, Budget, Navy
At least Top Gun was created before we had to curtail Air Force flying.