After the Westboro Baptist Church tweeted this:

BREAKING: Westboro Baptist Church to picket funerals of those dead by Boston Bombs! GOD SENT THE BOMBS IN FURY OVER FAG MARRIAGE! #PraiseGod

It wasn’t long before the Internet united in one voice condemning the WBC, and it manifested itself in the form of a White House petition to ban the controversial church from the city of Boston. 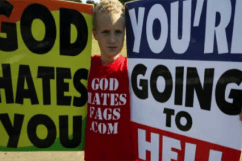