For the family of Rehtaeh Parsons, the pain of losing their daughter will not end. Posters defending the four boys who allegedy sexually assaulted the Nova Scotia teen were seen in her Halifax neighbourhood.

Rehtaeh’s stepfather, Jason Barnes, told CBC News he first noticed the posters stapled to telephone poles on his street on Wednesday morning. According to Global News, the neon posters were seen in the areas of Cole Harbour, Eastern Passage and Halifax.

2) They Were Soon Removed

Barnes said that after returning home after taking his children to school, the posters had been removed and thrown in the trash.

The homemade posters read, “Speak the truth. There’s two sides to every story. Listen before you judge. The truth will come out. Stay strong and support the boys.”

Reportedly, a Facebook page to support the young men was also created, but has been reportedly removed at the request of the RCMP.

“Just keep your heads up guys,” one poster wrote. “This will go away in time and just keep in mind everybody that knows you, knows you didn’t do anything.”

Barnes told CBC News his family called police to complain, but they told him there was nothing they could do.

According to local RCMP, posters like this are not a criminal offence, even though they may be considered disrespectful and upsetting. 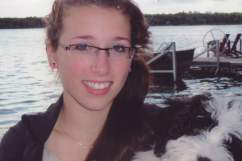 5) Rehtaeh’s Mother Is Firing Back

“This is our street, we are mourning our daughter, my children live in this neighbourhood. If you wanted to speak the truth … why didn’t you speak when Rehtaeh was alive … you push her to suicide then you continue with this bullshit!!! Really???? You have no compassion … but we knew that already,” Leah Parsons Parsons wrote on the Facebook page created to honour Rehtaeh’s memory.

“It just felt like someone kicked me in the stomach. How dare they do that?” she also told Global News.

“My daughter is gone because of them and they have the nerve to show up on my street and my community where my children live and keep harassing us. That’s harassment.”