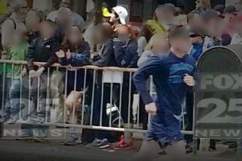 Special FBI Agent Rick DesLauriers is charged with leading to hunt for the terrorists who bombed the Boston Marathon finish line on Monday, killing three and injuring 176.

1. FBI to Team Up with Various Law Enforcement

Rick DesLauriers tells reporters that the FBI would be teaming up with various departments including the CIA, NCC, the Boston Police, and the Massachusetts Police to investigate the bombings. According to the FBI website, Rick DesLauriers states that, “Our mission is clear—to bring to justice those responsible for the marathon bombing.”

2. Rick DesLauriers Assures There are No More Threats

Rick DesLauriers told the media that there have been “no known additional threats.” The special agent adds that the investigation will spread out to various areas in Boston for a thorough search for the perpetrators. “The citizens of the city of Boston and the Commonwealth of Massachusetts want and deserve answers.”

3. No Suspects Have Been Apprehended

Officials refused to give any more details on the investigation other than saying that no suspects have been in custody so far. No groups or person have stepped forward or claimed responsibility for the blasts.

4.DesLauriers has Urged the Public For Help and Support

Special agent Rick DesLauriers has told the Boston residents to lend their support and help law enforcement with any information they may have on the bombings at the marathon. Rick said, “Assistance from the public remains critical in establishing a timeline of events, which leads to swift conclusion through due diligence and strong investigative activity.”

5. The FBI Has Received Many Tips in the Investigation

The FBI has encouraged citizens to use the tips hotline for any information that may lead to the capture of those responsible for the bombings. DesLauriers told the press that there have been “voluminous” tips given to them in the last 18 hours during the investigation. He has urged the public to call their hotline at 1-800-CALL-FBI for any information they can provide.

6. DesLauriers Says More Help is On the Way

Officials say that with the additional victim assistance and the Evidence Response Team, the evidence gathered at the crime scene would be processed soon to find out more about the bombs.

7. The Saudi “Person of Interest” Has Been Deemed to be a Victim

Although officials declined to comment on a lead, investigators had been on the search of a Saudi who has been declared a person of interest in the investigation, but has since been confirmed as a victim. The police searched an apartment near Revere, Massachusetts in connection to the bombing. They have questioned the unnamed man’s roommate Mohammud Hassan Bada on his whereabouts, according to the NY Daily News. Mohammud told the police that he has not seen his roommate since before the Boston Marathon.

8. Rick Says This Will Be a Worldwide Search

Rick said that the FBI’s investigation of the bombing will be “worldwide” saying that he would “go to the ends of the Earth” to catch whoever is responsible. Voice of America reports that the White House claims this incident as “clearly an act of terror.” London has also taken precautions since the incident by beefing up security for their upcoming marathon as well as the funeral of Margaret Thatcher.

After only a day since the explosion, it’s still no surprise that the Copley Square area is still under investigation. Rick told the media that, “To the extent the crime scene still plays in Copley perimeter—it continues to be a crime scene and may be that for days.”

10. Boston Residents May Be Interviewed by the FBI

The FBI announced that they and the Joint Terrorism Task Force will be around Boston interviewing people in the next few days to gather Intel on what happened during the bombings. Rick encourages the public to “please cooperate with law enforcement authorities.”