Saudi Arabia has sentenced a man to be paralyzed as punishment for a crime he committed 10 years ago. reports Euronews.

When Ali al-Khawahir was 14, he was found guilty of stabbing a childhood friend, paralyzing him from the waist down. After serving 10 years in prison, Khawahir has been sentenced to be surgically paralyzed as Saudi Arabia practices Islamic sharia law, which allows eye-for-an-eye punishment for crimes. However, the system also allows for victims to pardon the crime for a certain amount of money. In Khawahir’s case, it’s one million riyals (about $267,000).

Many outlets are condemning the sentence, such as the Foreign Office and Amnesty International, who say that it is “torture” and a “grotesque punishment.”

“We are deeply concerned by reports that a Saudi Arabian court has sentenced a man to be paralysed in retribution for causing the paralysis of a friend when he was 14 years old,” An FCO spokesman said. “We urge the Saudi authorities to ensure that this grotesque punishment is not carried out. Such practices are prohibited under international law and have no place in any society.”

Amnesty says that if the punishment is carried out, Saudi Arabia could violate the UN Convention against Torture, which the county is a part of.

“Paralysing someone as punishment for a crime would be torture,” Ann Harrison, Amnesty’s Middle East and North Africa deputy director, said. “That such a punishment might be implemented is utterly shocking, even in a context where flogging is frequently imposed as a punishment for some offences, as happens in Saudi Arabia.”

Saudi Arabia is known for serving other “eye-for-an-eye” punishments, such as flogging, eye-gouging and tooth extraction, but intentionally paralyzing a person takes it to a new level. 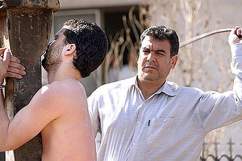 Rape Victim Sentenced to 100 Lashes for Having Pre-Marital Sex

Read More
Crime, Saudi Arabia
A man is sentenced to be paralyzed as punishment for a crime he committed 10 years ago.